skip to main | skip to sidebar

For those of you out there who've never been exposed to the adorableness that is the chinchilla, here are some quick factoids you might want read up on. If you don't have a chin, maybe then you'll decide you'd like to get (i.e. ADOPT) one!

If you have any other questions about chin life, don't be afraid to ask! I'm always open for questions. Leave a comment and I'll get back to you. Zumi-chin OUT!
Posted by I'm Janna. at 6:57 PM

We have found that one thing they love is to have a large flat rock or a piece of that fake rock that is used on fireplaces in their cage. He likes to sit on it and scratch it, maybe this is how he trims his toe nails. 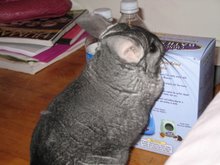